Small enhancements can shave several minutes off each exam, adding up to measurable productivity gains – always a key objective in radiology administration. Carestream’s ImageView Software from Medray has an intuitive and easy-to-use touch-screen interface that places the most commonly used operations on a single screen. From within a single screen, rad techs can view and access patient data, study data and views; the image viewer and positioning aids; and formatting and workflow controls. After the image is captured, it is displayed on the centre panel, replacing the image viewer and positioning aids. And the acquisition controls on the right are replaced with markers and image manipulation/processing tools

Do you know that protocol errors accounted for 28% of callbacks? (1)

That’s why Image View automates workflow with uniform protocols set to the preferences of your imaging facility, providing consistency to minimize repeat exams.  Also, radiographers can access both RIS and PACS without returning to the department’s terminal – reducing the time to complete a study. 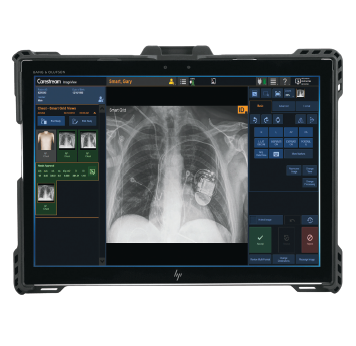 Advances in image processing also speed up workflow. For example, Digital Tomosynthesis uses a single sweep of X-ray exposures and simplifies the operator’s workflow by separating the process of DT exposure acquisition from image volume formation. As a result, multiple projections are acquired during a single DT acquisition sweep. The exam time is greatly reduced compared to traditional tomography, doing away with the trial-and-error process in locating the anatomical region of interest. By the way, inadequate anatomic coverage was the cause of about 21% of callbacks, with 50% of them occurring at the time of the examination.

For more on Carestream's ImageView Software from Medray click here